2015-06-17
We continue the series of articles that are devoted to the release of a new “Nidan” module. Today let’s talk about subdoshas of Pitta dosha, or five kinds of fire (Pitta).
Complete digestion of food begins in the cavity of the duodenum. Three secrets are allocated in the cavity of the duodenum during digestion.
The first secret is pancreatic juice (naturally secreted from the pancreas in an amount of 1.5-2 litres a day). It contains a complete set of enzymes required for hydrolysis coming from the stomach chyme (bolus, impregnated with mucus and gastric juice). These include proteolytic enzymes that cleave proteins (e.g. trypsin), amylolytic enzymes that break down complex carbohydrates (pancreatic amylase), and lipolytic enzymes that break down fats (lipase), and other enzymes. Violation of Pachuka may lead to changes in the profile of secreted enzymes that will inevitably affect the quality of the digestion.
The second secret is bile (1.0-1.8 liters per day) that does not contain enzymes, but is composed of components (bile acids and lecithin) required for complete hydrolysis of fats and absorption of fatty acids. Without bile fat is not absorbed by the body. Violations of Pachuca will inevitably affect the quality of the assimilation of fats.
The third secret is actually intestinal juice (2.5 liters a day), secreted by the cells lining the small intestine and incorporating all of the above enzymes like pancreatic secretion.
Thus, Pachuca is associated with these digestive secretions of the small intestine.
Why is Pachuca Pitta called the “digestive fire”? Generally, it is said that during digestion a lot of heat is being produced. The question is how it is formed. And the paradox is that at this stage of decomposition of matter (in order to extract from it the energy for spending on the processes the body needs) it is impossible to generate heat from food.
Then where does the heat come from? It turns out that for the full digestion the body must include a very large number of energy-consuming biochemical and biophysical processes, among which the main ones are the synthesis and secretion of enzymes and mechanisms of absorption of the food hydrolysis’ products. In these processes the body expends a tremendous amount of power (enhanced by filling with blood of the digestive tract), which at the time of digestion is felt as heat. This is the “fire of digestion» – Pachuca Pitta, i.e. its own body heat, which it removes for the absorption of Prana from food to recover the energy spent on digestion.

Another aspect associated with Pachuca, is an endocrine system of the gut itself, which is represented with the single cells that secrete a broad spectrum of hormones involved in setting up of complex mechanisms of digestion and located diffusely in the mucous membrane. These hormones are secretin, cholecystokinin, gastrin and others. In this regard, duodenum is often being compared with the pituitary gland of the digestive system, because it surpasses all the glands of the body with the amount of hormones produced per day during digestion. Violations of Pachuca will inevitably affect “thin strings” of regulation of the digestive process that is often associated with psychosomatic disorders (peptic ulcer, peptic ulcer of duodenum, duodenitis and gastritis).
​
It should be noted that Pachuca Pitta is associated with Vata, as the excretion of enzymes, bile and acid are associated with the Vago-vagal (derived from “vagus” – parasympathetic nerve) reflexes and enteric nervous system (nerve plexus of the intestinal lining).
Pachuca Pitta is the foundation and support for all other types of Pitta. In the treatment of Pitta, it should be given special attention, as the digestive fire is our main source of heat.
​
• catalase (system of enzymes (from the Greek. χαταλύω – destroy) that decompose peroxide formed in the process of biological oxidation of hydrogen to water and molecular oxygen, also oxidize low molecular weight alcohols and nitrites in the presence of hydrogen peroxide; it contains almost in all organisms, and involved in tissue respiration);
• peroxidase (see catalase).
Heme is synthesized in all cells, but mostly in the liver and bone marrow. It consists of ionized ferrum in the divalent state and protoporphyrin (protein, containing a light-sensitive component – chromophore). Disorders of Ranjaka can be cause of a disease group referred as “porphyria” in which the metabolites of heme synthesis accumulate in tissues, causing staining and increased light sensitivity (which is very typical for Pitta dosha in general because of a genetic predisposition and a higher level of normal porphyrins). These metabolites can have toxic effects on the nervous system, causing neuropsychiatric symptoms. Higher levels of porphyrins in the blood in people with Pitta dosha makes them irritable and short-tempered, but at the same time, insightful and extremely active.
The catabolism of heme leads to the formation of degradation for products of bilirubin, which stains the skin, urine and feces. In extreme variants in diseases of the liver this leads to jaundice. It is very important to understand that disorders of Ranjaka Pitta is always associated with disorders of the liver.
Ranjaka is associated with ferrum metabolism. Its violations can result in various types of anemias (ferrum deficiency, autoimmune, etc.).
​
It is known that gamma-melanocytestimulating hormone stimulates the reproduction of melanocytes of the skin and enhancing the production by the melanocytes of black pigment – melanin. Due to this effect of gamma melanocytestimulating hormone increases pigmentation of the skin and improves the skin’s resistance to UV light, thus adjusting the heat absorption through the skin. It is known that black color absorbs sunlight and, consequently, heat well. The color of melanin can be perfectly seen in moles. And people with a Pitta constitution are often “marked” by the Sun with flecks of sunlight (accumulation of melanocytes).
In addition, melatonin neutralizes the destructive effects of oxidative processes, which are the main cause of aging and fading of skin. The most important function of melatonin’s antioxidant activity, which is manifested in the body everywhere, since melatonin penetrates into all organs and tissues. The mechanism of antioxidant action is manifested in the fact that melatonin possesses a high capacity to bind free radicals, including those produced during the lipid peroxidation of hydroxyl radicals, and exogenous carcinogens, it also activates glutathione peroxidase – factor protecting the body from free radical damage. The main functions of antioxidant action of melatonin is aimed at protecting the DNA.

Melatonin is produced in the pineal gland, however, the amount of hormone that is produced in the pineal gland, is insufficient to provide so many biological effects of melatonin. Extra pineal sources of melatonin synthesis are enterochromaffin cells of the gastrointestinal tract (EC-cells). This basic cells depot serotonin (contain up to 95% of the total endogenous serotonin) – precursor of melatonin. This important factor connects Bhrajaka with Pachuca Pitta.

It is known that serotonin is a potent regulator of vascular tone, its level in the blood can determine the level of heat loss and heat absorption associated with skin.
Another physiological function, closely related to Bhrajaka Pitta, is the immune system of the skin. There are unique cells (Langerhans) in certain layers of the skin, which have the ability to teach the blood lymphocytes to find and destroy foreign agents in the body. In addition, the skin constantly possesses microbial flora with which we have an “agreement on mutual cooperation”. It helps protect us from aggressive disease-causing agents, creating the biocenosis of the skin (similar to bacteria of the intestine). Disorders of Bhrajaka Pitta can change the laws of cooperation between the immune system of the skin and these bacteria, contributing to the development of inflammatory skin diseases.
​
Furthermore, it is known that the active form of vitamin D is formed in the skin by ultraviolet radiation, which has a strong immunomodulatory effect (in addition to the participation in the exchange of calcium, the absorption of which it amplifies in the gut). The changing nature of production of vitamin D, apparently, may also affect the immune system of the skin.

Recent research in the field of electrophysiology (Pokrovski, 2003) proved that the generation of electromagnetic pulse cells- pacemakers, forcing the heart to contract, is transmitted via afferent projections to the brainstem and tones its reticular formation (which determines the level of manifestation of consciousness in the material world).
​ 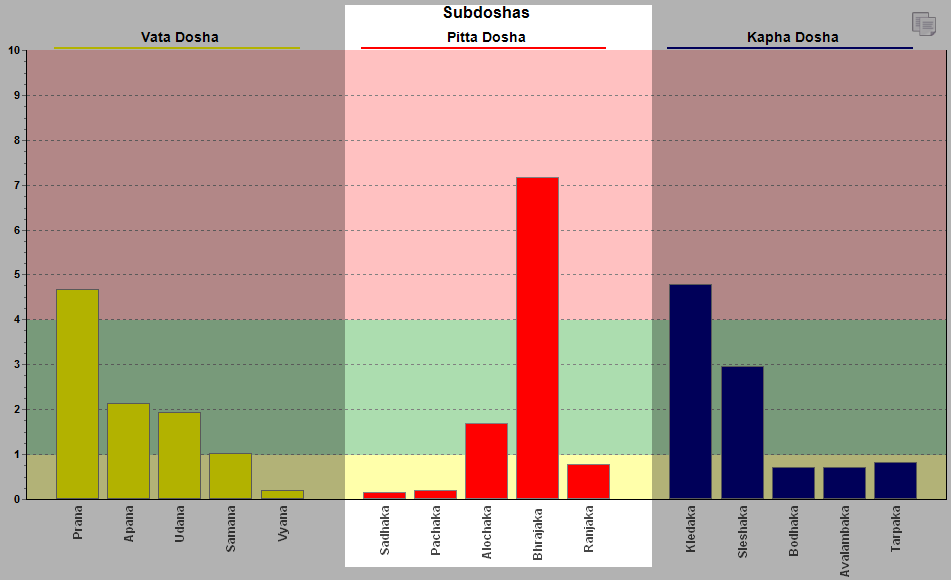