2015-03-13
​
Elaborating upon a theme, that we have begun in the article "A practical example of the assessment’s results analysis from the perspective of Ayurveda”. We have at our disposal several assessments of one patient. This allows us to study the dynamics of his condition in detail.
​The first assessment was carried out 22. 05. 2011. The first thing we can see is VPK graph in the "Balance" tab. KAPHA dosha is imbalanced. Moreover, the imbalance is great.
​ 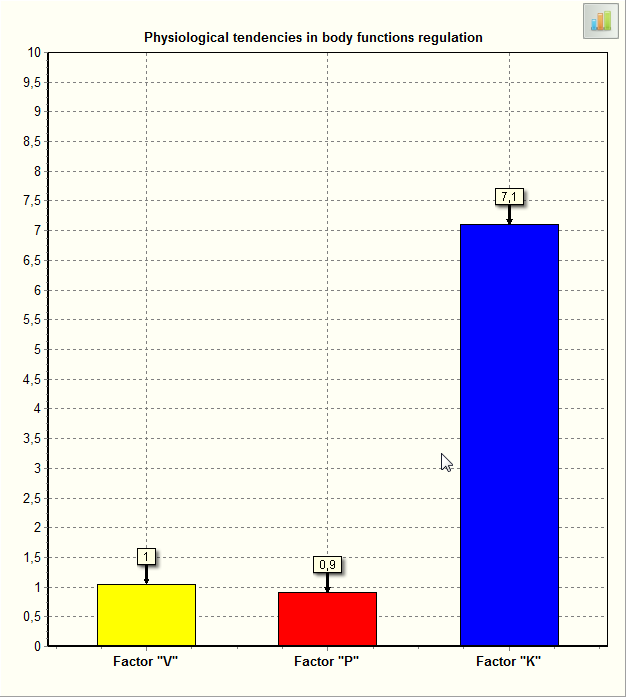 Next, go to the "Meridians» tab and examine the state of energy in the four channels, which are related to KAPHA dosha. Remind them: Stomach, Spleen, Pericardium, Triple heater. In this case, there is the tension in the channel of the Stomach (3).
​ 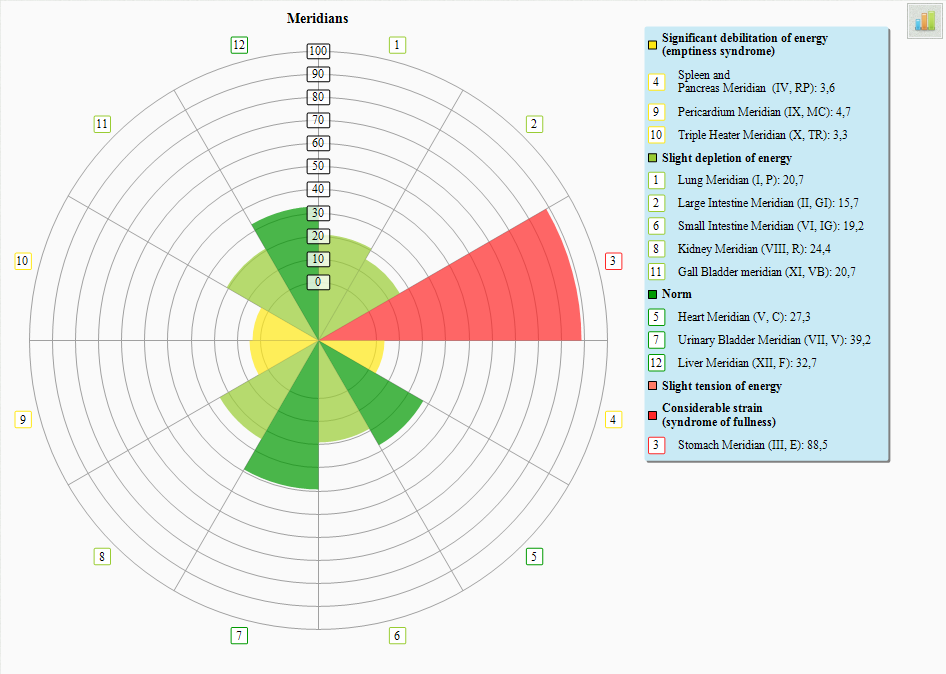 In principle, we have found the main thing and can navigate "Aroma", "Phyto", "Diet", "Supplements" tabs and make those recommendations that the program created automatically based on this assessment. However, we do not just rely on the software – we need to have a good look at the assessment’s results by ourselves and to explain them to the patient.

So, KAPHA-dosha. From the perspective of Ayurveda, it is associated with the elements of Water and Earth. From the standpoint of physiology, it is responsible for the processes of anabolism (energy absorption and synthesis of molecular complexes). How food will be absorbed largely depends on how the stomach works, which will eventually turn into energy and new cells.

As we have found the tension in the Stomach channel, it is logical that the most important thing is to keep the diet, since everything we eat enters the stomach. Therefore, the program, to fix the imbalance of KAPHA and relieve stress in the channel of the Stomach, will recommend: to stop eating sweets, dairy products and fatty foods (because they reinforce the elements of Water and Earth, that is, KAPHA), to include a large amount of spices in the diet, to begin to lead a more active lifestyle (to activate the Fire element and thereby strengthen the PITTA). Moreover, it is very useful to increase not only physical activity, but also emotional - you need to allow yourself more emotionally warm relationships in your life.
​
Lack of energy, from the perspective of Ayurveda, has appeared in the weakening of PITTA. Recall the schema of Containment of energy, from which it follows that excessive Water activity restrains Fire. Often they say: "Water extinguishes Fire." However, from the perspective of provable medicine, lack of energy (weakness of catabolic processes) has showed in the strong decrease of the LF component compared with the HF-component of the autonomic balance in the diagram. 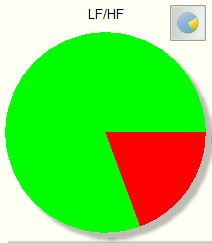 It will be recalled, that LF-component of diagram (marked in red) represents the activity of the sympathetic division of the autonomic nervous system, responsible for the mobilization of heart and HF-component (marked in green) represents the activity of the parasympathetic division of the autonomic nervous system, which is responsible for relaxation of heart muscle. According to the regulations, during wakefulness in a calm state share of LF must exceed the proportion of HF in 1,5-2 times. In this case, HF dominates, but its share is 6.5 times greater than the share of LF. Now, such a strong imbalance led to the breakdown of adaptation mechanisms. By the way, in the last example we considered the other extreme: the autonomic balance was broken in the direction of the sympathetic. Interestingly, despite such extreme figures, often the breakdown of adaptation mechanisms proceeds in a similar manner, but requires the opposite approach to rehabilitation.
The dynamics in the process of the broken adaptation mechanisms are reflected on the scatterogram.
​
​22.05.2011 the heart rhythm was regular.
15.06.2011 in the first half of the day there was an attack of tachycardia and arrhythmia. In the evening tachycardia has gone, but the arrhythmia remained. 17.06.2011 the heart rhythm is regular again. But notice how "compressed" the heart has become compared to the assessment from 22.05.2011 г. If you have a look at the VPK chart in the assessment from June 17, you can find that another dosha – VATA – has gone out of the balance.
​ 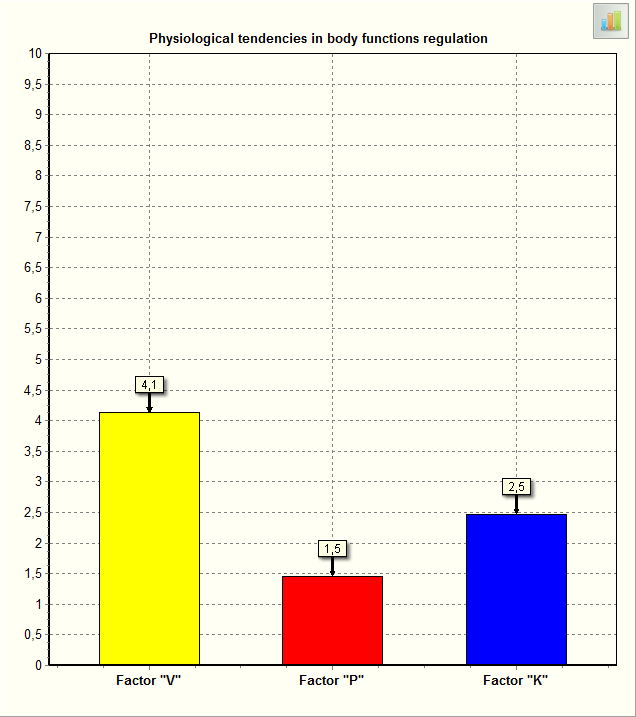 This indicates the growth of nervous tension in the body.
​ 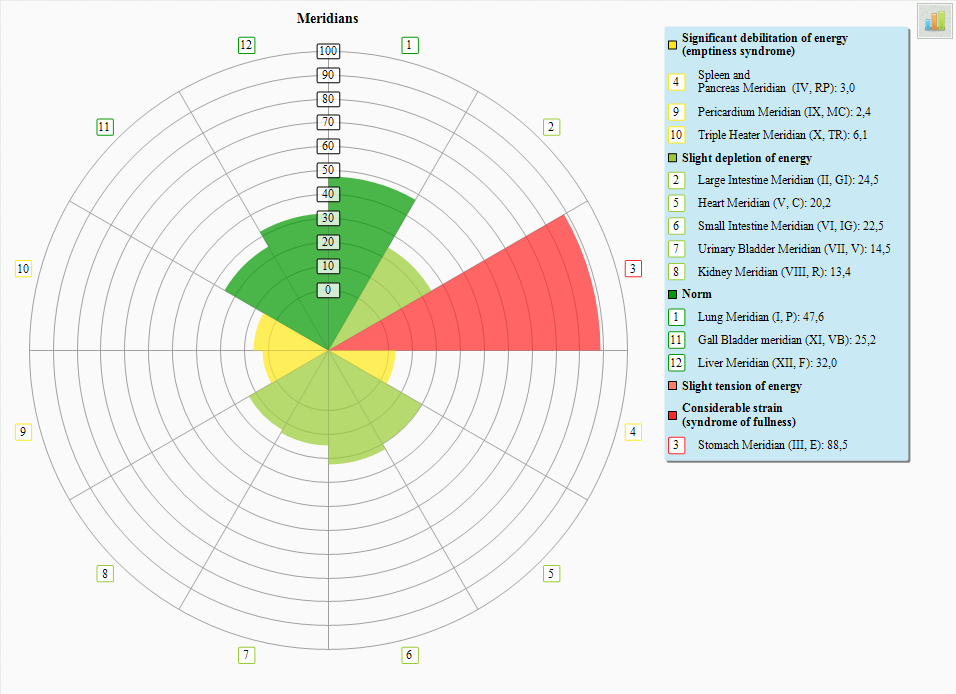 In Addition, the tension in the Stomach channel is maintained.
Therefore, it can be stated that the patient’s energy state has deteriorated for the month; also periodically, he had attacks of arrhythmia and tachycardia. But what is very important, despite the ongoing tensions in the Stomach channel and the imbalance of KAPHA, however, the patient has no complaints about the stomach. What can we conclude?

One of two things: either we managed to fix that very important stage, when there is not any pathology developed yet, but the disease is already advanced on the energy (from the perspective of Ayurveda) and functional (with positions scientifically provable medicine) levels; or pathological changes already exist, but as yet there are no obvious symptoms. In any case, this situation requires the most careful attention of the gastroenterologist.

And, of course, in any case a radical correction of diet and lifestyle is required. Recommendations are contained in the respective tabs of the program. And we select recommendations based on the latest assessment, as it reflects the current status of the patient (by the way, let me repeat that for generating recommendations suitable only those assessments where the heart rhythm is regular, with no arrhythmia). If we consider the situation from the perspective of psychosomatic reasons, the tension in the Stomach channel indicates the complexity of the "digestion" of any situation or relationship. In this person's life there is something that he can't take. And it was quite long and serious situation. And the weakness of the Fire element indicates too passive stance. The person avoided conflicts too much and did not insist on his point of view. A stalemate has arisen due to the fact, that man could not neither accept nor reject something. This has created stagnation, not only psychological, but also on the energetic and physiological levels.

I will use the occasion to remind you about the wonderful author, Rudiger Dahlke. His book: "The Disease as a way", "Illness as the language of the soul", "Crisis as a chance to start living better!" will help you to find a psychological problem, prior to this situation. And understanding of the situation is already half of the battle. Again, I want to draw attention to the fact that the patient has no complaints about the problem area that we have identified. He complains of arrhythmia, general weakness of the body, on anything but not on the stomach. But using a computerized pulse diagnosis "VedaPulse" we got this "assemblage point".
In conclusion, a traditional appeal to all "VedaPulse" users: continue to send the results of the assessments that have caused issues.
​
Download the assessment: Student0013_kanal-zheludka.rar
The contents of the archive sample should be placed in
C:\Biokvant\VedaPulseEng\DB\DATA

​<--- Previous article
A practical example of the VedaPulse assessment’s analysis from the perspective of Ayurveda
Next article --->
Subdosha. Part I: Vata dosha