2015-09-17
Likewise the five types of Vayu (air) and five types of Agni (fire), there are five types of Kapha-dosha, which collectively form the interaction of the elements of earth and water in the body (according to the Ayurvedic theory of Pancha-Maha-Bhuta).
As a rule, when saying Kapha-dosha, one usually means water element. So, most translated from English Ayurvedic books, such as one by David Frawley (2004), determine subdosha Kapha-dosha as five types of water. We need to specify this concept first before we start describing each subdosha.

There is no free water in the body, and its appearance is always a pathology (e.g., anasarca — free liquid in the abdominal cavity, pleurisy — inflammatory liquid in pleural cavity of lungs). In the body there are liquid mediums, that are not water directly, but are complex and multicomponent compositions of fluids and colloids associated with the ways of their circulation or forming a “liquid crystals” associated with the connective tissue structures. So, better use «phlegm» and “colloid” (or «moisture» in common terminology) instead of the word “water”. However, for simplicity and continuity of the texts in our article we will use the concept of «water».
​
Thus, there are five subdoshas of Kapha-dosha: Avalambaka, Tarpaka, Kledaka, Bodhaka and Sleshaka. Let’s give each of them a description.

​Control over Avalambaka by the lungs is associated with the process of respiration and excretion of excess moisture from the exhaled air.
Physiologically, the process of gas exchange in the lungs is associated with simultaneous changes in the moisture content of the alveolar gas (the so-called air contained in the alveoli of the lungs). The proportion of water vapor in atmospheric air leaves less than 1% of the gas mixture, at the same time, the proportion of water vapor in alveolar gas is 6.3%. Therefore, moisture is constantly trying to leave our body through exhaled air. Control over this process depends not only on the frequency and depth of breathing, but also on the complex molecular biological phenomena occurring at the level of aero-haematinic barrier (tissue barrier between the cavity of the alveoli and blood capillaries of the lungs). This process involves surfactant – a substance which is specific for lung tissue, it represents phospholipoprotein that covers the inside of the alveoli and prevents their deflation. As far as the true moisturizing in the body is provided by phospholipids (not water, as is commonly believed, because the water in its characteristics is dry), surfactant keeps the excess transfer of plasma from the capillaries, having a hydrophobic (water repellent) properties. It should be noted that the transcapillary exchange of liquid with tissue is much more complicated process, where the surfactant is only a part of the system.
In fact, lungs are the main place of Kapha-dosha’s localization. Therefore, the state of the lungs (from a medical point of view) depends on the condition of this dosha.
Interestingly, the mechanism of the body’s cooling by means of the excess moisture removing through the respiratory system is especially well developed in birds that do not have sweat glands, and also in some mammals, such as pigs, cats, dogs.
Sweating and control of diuresis are also the mechanisms to regulate the flow volume of moisture in the body. In Chinese medicine the sweat is called the “juice of heart”, which indicates that the heart controls this process.
And here a natural question arises: how can it regulate water exchange in the body?

As it happens, in addition to contractile cardiac myocytes there are also so-called secretory cardiac myocytes, which are endocrine islets, located mainly in the right atrium in the heart. They produce a hormone called “atrial sodium uretic peptide”. This atriopeptin influences the moisture balance (Avalambaka Kapha), as well as the metabolism of adipose tissue. The latter is known to be the depot of endogenous water. Thus, the oxidation of a fat molecule involves a sufficiently large number of water molecules’ excretion. Atriopeptin is secreted in response to increased pressure in the vascular system and provides a number of system actions: vasodilatation (expansion of blood vessels and, as a result, drop in pressure); stimulates the excretion of water through the kidneys and sweat glands (reducing the amount of circulating blood); reduces the concentration of sodium (conditionally salt, which retains water in the body) in the blood plasma and enhances the release of adipose tissue free fatty acids. The latter circumstance again connects us with the control of moisture through the control of fat metabolism.
​
Disorders of Avalambaka Kapha affect such gunas as dryness/humidity.

mechanisms regulating its release. Gastric mucus is necessary not only for the wetting of the bolus, which comes from the esophagus (the bolus turns into chyme – pasty mass), but also to protect the walls of the stomach from the damaging action of hydrochloric acid and pepsins. Mucus is alkaline and neutralizes excess gastric aggressive factors of the stomach juice. The main factor governing the production of mucus cells, is a band of tissue hormones — prostaglandins. These hormones, on the one hand, contribute to the restoration of mucous gel covering the stomach inside and protects it from hydrochloric acid; on the other, contribute to reparation (recovery) of damaged areas of the gastric mucosa.
Disorders of Kledaka Kapha manifest decline in the production of prostaglandins and gastric mucus, which leads to the ulcers.
Frequent use of drugs, such as aspirin and paracetamol, evolves Kledaka disorders, it directly blocks the formation of prostaglandins and provokes ulcers.
The perception of taste is a complex consistent chain of events that begins with stochastic entering of the food’s taste part into taste pore of taste bulb. This is possible only under one circumstance: food must be moistened with saliva, and this particle in its liquid phase will reach the entrance of the taste bud.
Next, taste particle interacts with receptors on taste cells and this leads to electrical impulses that are transmitted by the gustatory nerves to the corresponding brain structures. Thus, the image of taste is formed, which is closely linked to altering our motivational and volitional behavior, emotiogenic structures of the brain.
Disorder of Bodhaka Kapha is not just a breach of taste sensitivity, it is, primarily, the change of the emotional state of a person and his ability to perceive the reality through the prism of his consciousness.
Brain structures responsible for emotional state, composure and happiness (in particular, limbic structures) are the producers of “happiness hormones — endorphins and enkephalins. Of course, Tarpaka Kapha is associated with opiate-ergic neurotransmitter system.
Yoga practice helps to increase this form of Kapha, which is manifested as satisfaction and bliss (Ananda).

​Elastic articular cartilage is also an effective absorber of an intermittent mechanical loads that affect many joints. A similar mechanism is observed in the intervertebral discs. Molecules of proteoglycans, which are found singly or in aggregates, form a network and contain significant amount of water. They are matrix components, which are abundant in highly branched glycosaminoglycans that function as a biomechanical spring. Under efforts, the water is squeezed out of the cartilage matrix into the synovial fluid. When squeezing water out of the cartilage, another mechanism, providing it elasticity, turns on. It is associated with the mutual electrostatic repulsion of negatively charged carboxyl and sulfate groups in the molecules of glycosaminoglycans. These charges provide the separation of glycosaminoglycans branches, which creates a space that can be filled with water. When the pressure is reduced, water is drawn back into the space between the branches of glycosaminoglycans molecules. Such displacement of water is caused by the functioning of the joints. They play an important role in the nutrition of the cartilage and facilitate the mutual exchange of oxygen, carbon dioxide, and other molecules between synovial fluid and articular cartilage.
Disorders of Sleshaka Kapha show themselves in impaired production and resorption of synovial fluid, as well as in restoring the integrity of the articular surface.
​ 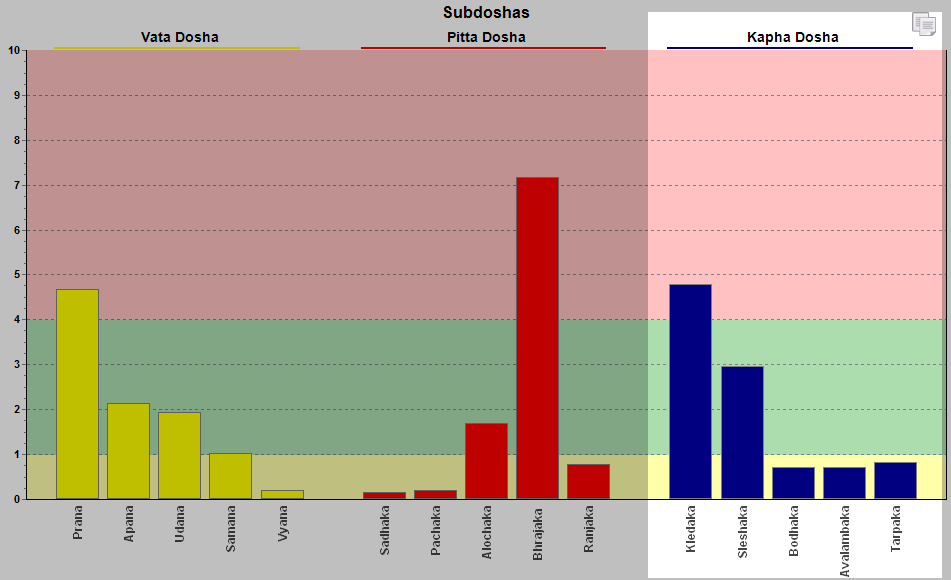 ​
<--- Previous article
Subdosha. Part II: Pitta dosha
Next article --->
VedaPulse - a new milestone of recognition by the leading experts of Ayurveda in India